What is the Seat Belt Defense in Florida? 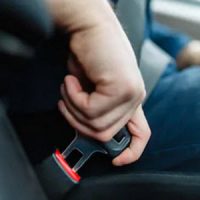 If you were not wearing a seat belt when involved in an accident, then the defendant might argue that you contributed to your injuries. This is the seat belt defense, and unfortunately it is the law of our state.

The Seat Belt Defense in Action

Imagine you are involved in a crash that breaks several bones, causes a concussion, and forces you to miss 6 months of work. In all, you might have suffered $60,000 in damages when calculating your medical bills, lost wages, and pain and suffering.

Fortunately, the other driver is obviously to blame because he ran a red light and T-boned you. However, you were not wearing a seat belt at the time. Although the other driver was to blame for the accident, he might claim that your failure to wear a seat belt is a form of negligence, and that you consequently bear some of the blame for your damages.

This is an example of using the seat belt defense. Because a prudent person would wear a seat belt, the defendant is claiming you were negligent for refusing to wear one. And this negligence has contributed to your injuries.

Is the Seat Belt Defense Legal?

Yes, it is. Some states have outlawed the seat belt defense. In those states, failure to wear a seat belt cannot be used to show comparative negligence.

Florida disagrees. Our Supreme Court stated in Ridley v. Safety Kleen Corp. (1997) that failure to wear a seat belt can be raised as an affirmative defense of comparative negligence. This rule is also found in Fla. Stat. § 316.614.

As the Court was quick to note, the statute states that failure to wear the belt is not negligence “per se”—meaning it is not automatically negligence. But it can be considered proof of negligence if the jury believes that a reasonably careful person would have buckled up in the same circumstances. Consequently, you can expect the defendant to raise the seat belt defense.

This does not mean that you will not receive compensation. There might be legitimate reasons why you didn’t wear a seat belt. As an example, you might suffer from a medical condition that makes wearing a belt unsafe.

Further, if the jury believes that failing to wear a seatbelt was negligence, this does not mean you lose. Instead, your negligence might simply reduce the amount of money you take home.

The seat belt defense is complicated, and injured victims should not assume they will be denied compensation. At our firm, our Delray Beach car accident attorneys have experience shining a spotlight on the defendant’s misconduct and minimizing any negligence committed by our clients. For help, contact Earnhart Law today for a free consultation by calling 561-265-2220.