Cyclist Safety: Not All Bike Lanes Are the Same 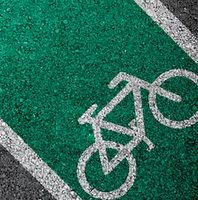 Many advocates for the rights of cyclists want cities to install more bicycle lanes, usually to improve safety. However, a recent study from the Insurance Information Institute (III) has shown that different designs provide dramatically different levels of safety. And the results are somewhat surprising.

Many proponents of cyclist safety believe that protected bike lanes are the safest. These lanes provide a physical barrier between the bicycle lane and the rest of traffic. Because of the barrier, cyclists are shielded from motor vehicles pulling into their lane and hitting them.

However, a recent study by III found that protected bicycle lanes are not always the safest, particularly at street level. On bridges and raised roadways, then two-way protected bicycle paths dramatically reduced the risk of a fall or crash. But on street level, two-way protected paths posed a higher risk of fall or crash than if the cyclist were on a road with no bicycle lanes. These results are somewhat surprising and upend a widespread belief that protected lanes are always the best option.

Furthermore, one-way protected bicycle lanes had almost no difference on the rate of injury. There were several reasons hypothesized. For one, pedestrians can still enter a protected bicycle lane, which can cause accidents. Also, cyclists were still coming into contact with motor vehicles at intersections and alleys, so collisions with those vehicles still happened.

Protected bicycle paths did have some advantages, however. Although the rate of injuries did not decline, injury severity did. A cyclist was less likely to suffer a serious or fatal injury on a protected bicycle path than on a street without any bicycle lanes. As the study’s authors conceded, protected lanes did reduce the most serious injuries, which is perhaps what cyclist advocates are trying to accomplish.

Any city hoping to improve its safety for cyclists should consider the findings of the report. There are many options for making the roads safer for cyclists, and urban planners should consider all of them. The study’s authors recommend that cities consider conventional bike lanes (that don’t have barriers) while trying to improve visibility in those conflict points where cyclists come into contact with motor vehicles.

Unfortunately, Florida has a terrible safety record when it comes to pedestrians and cyclists. According to the Bicycling website, Florida has the highest per capita rate of cycling deaths. In 2015, for example, our state saw 18% of all cycling deaths, which is 3 times the national average. Studies have shown that drivers are mostly responsible for accidents.

The Delray Beach personal injury lawyers at Earnhart Law have helped accident victims for more than three decades obtain compensation after a collision. If you were injured while riding a bicycle, you might not know what steps to take in order to get the compensation you need.

Contact our law firm today. We offer free consultations to those who call 561-265-2220, and there is no risk to getting in touch with us.