Underride Accident Flattens Car on I-95 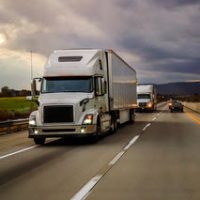 One of the most dangerous car accidents involving semi trucks is an “underride.” In this type of collision, a vehicle gets wedged underneath the trailer. Underrides happen because trailers sit higher off the road, thus allowing cars to slide underneath.

Underride accidents often happen when a motorist cannot brake in time or when a semi truck cuts off a vehicle, often by pulling into a different lane. According to the U.S. Government Accountability Office (GAO), about 219 people die each year from underride accidents.

This type of accident was on graphic display in an Orlando Sentinel story. The accident happened on I-95 on Sunday afternoon just north of Linton Boulevard. The woman who drove the sedan that slid underneath the tractor-trailer did not die but did suffer injuries that were not life-threatening. She was taken to the hospital. Two of the car’s tires were flattened in the crash, which took place just before 1:00 PM. The accident backed up traffic for hours.

The woman injured this Sunday was lucky that she did not suffer greater injuries. Some underride accidents actually shear the roof off a vehicle, exposing motorists to possibly being decapitated if they are travelling at a high rate of speed.

Others will suffer permanent brain injuries or facial disfigurement in this type of crash. Glass from the windshield can cut and scar victims, sometimes permanently, and damage nerves in the face, leading to partial paralysis. Recovery time can be very slow, and many people suffer severe psychological distress after an underride accident.

One way to prevent underride accidents is for trucks to install guards on each side of their trailers, as well as on the back. These guards provide a barrier that can prevent a car from sliding underneath the truck. However, there are few regulations in place. The federal Department of Transportation requires only that trailers have a safety bar in the rear, but DOT doesn’t require any guards on the sides of trailers.

However, the trucking industry rarely adopts greater safety procedures without prompting from the federal government, so we should not expect to see major safety advances made voluntarily in the future. Instead, public pressure will need to build to force change.

Were You Injured in a Trucking Accident?

At Earnhart Law, our focus is on receiving adequate compensation for our clients who have been injured in truck accidents. We can lift this heavy burden from you and take over your entire case, including negotiating fair compensation with the trucking company or its insurer.

Contact our Delray Beach truck accident attorneys today. We offer a free consultation which you can schedule by sending us a message or calling 561-265-2220.