Did the Truck Driver who Hit You Use a Cell Phone? 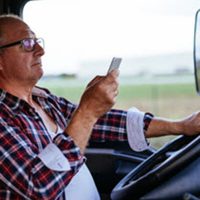 The Federal Motor Carrier Safety Administration (FMCSA) recognizes that distracted driving is deadly. When truckers are not paying full attention behind the wheel, they can easily slam into another vehicle out on the highway. What’s worse, these smaller vehicles will end up taking the brunt of any collision, even though their drivers did nothing wrong.

For this reason, the FMCSA has strictly limited cell phone use for interstate truck drivers. Those who haul long distances often get lonely, and it is perfectly understandable that they want to reach out to friends and family while driving. Truckers also need to be in communication with their employers about a variety of issues. However, using a phone while driving is dangerous, and the government has passed some sensible restrictions. If the trucker who hit you was on the phone, you could have a legitimate claim for compensation.

There is a simple, clear ban on texting while driving. This includes sending or reading a text. Not only would a driver take his eyes off the road, but he would have to remove at least one hand. Research has shown that a driver’s concentration is reduced for up to 27 seconds after sending a voice text, so this is a sensible prohibition. If a trucker is caught texting, he will be fined and can possibly be disqualified.

The FMCSA has gone a step further and prohibited truckers from using a hand-held cell phone to make a call. Their research showed that drivers were up to 6 times more likely to experience a “critical incident” (like a near miss) when they dialed a phone. When trucks are going at high speeds, even a few seconds is enough for them to crash into another vehicle or a pedestrian.

However, this does not mean that truckers are entirely prohibited from using a cell. In fact, the government allows “hands-free” devices. A hands-free phone is typically mounted on the dash and allows for voice-activated dialing. Federal regulations require that the device be mounted close enough to the driver so that he can comfortably reach it while being buckled in.

A device is not hands-free if it requires a trucker to push more than one button to operate. Any violation can result in a fine to the trucker, as well as a fine for an employer that allows the use of a device.

Unfortunately, even hands-free devices can reduce concentration, since the trucker is focusing on the conversation and not 100% on driving. Any divided attention increases the risks of an accident. If a driver struck you while using a hands-free device, they could still be negligent and liable for your injuries.

Earnhart Law has helped injured members of the public get compensation following a trucking accident. If successful, we can obtain compensation to cover your medical care, lost income, and other losses. Reach out to one of our Delray Beach truck accident attorneys for a free consultation.