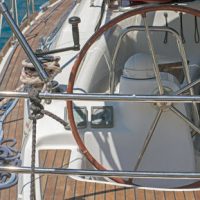 According to the Associated Press, a man in his 70s has died after a boat collision near Sandsprit Park. A spokeswoman with the Florida Fish and Wildlife Conservation Commission (FWC) identified the deceased as Matthew Jones, who was motoring a 21-foot boat with two other men up the St. Lucie River. He collided with a 17-foot boat operated by 79-year-old Reynold Miranda, who was travelling in the opposite direction. In addition to the death, two other passengers were injured in the collision. State officials have not yet identified the cause.

Of those reportable accidents, 56 resulted in at least one fatality. In total, 67 people were killed in the boating accidents for the year, with 29% of deaths caused by falls overboard. For the sake of comparison, 2015 saw only 52 fatal accidents that resulted in a total of 55 fatalities. Statistically, fatalities increased over 20% from 2015 to 2016—a big jump.

Overall, 421 injuries were reported in 2016, which works out to an injury rate of 45 injuries per 100,000 registered boats in the state. A little over 40% of all accidents involved collision with another vessel on the water.

Boating accidents have many causes—poor weather, vessel malfunction, and carelessness. But one of the most common contributing causes was alcohol or drug use, which reportedly was involved in one quarter of all boating accidents in 2016.

Rising fatalities and injuries should be a concern for everyone out on Florida’s waterways. To improve your own safety, consider taking a boating safety course. The Fish and Wildlife Commission has a list of online courses posted to their website. You can also take a classroom course for extra depth and breadth of coverage. Classes are offered by the United States Coast Guard Auxiliary and the United States Power Squadron.

Also encourage other boaters to leave alcohol at home. Given the high incidence of drugs and alcohol with boating accidents, people should enjoy their beverages on the shoreline and not behind the wheel of a boat. It is enough to enjoy the sun and each other’s company while on the water.

Injured on the Water? Financial Compensation Might Be Available

At Earnhart Law in Delray Beach, we have helped many clients who suffered a serious injury in a boating accident. Depending on the circumstances, we have secured financial compensation in either a settlement or a jury verdict to cover expenses such as:

Some of our clients have also qualified for pain and suffering or emotional distress compensation as well. To better understand your options, schedule a free consultation with us today. Call 561-265-2220 or send an online message.