Were You Injured in Fraternity or Sorority Hazing? 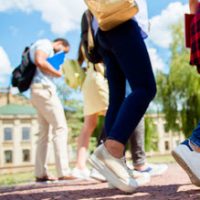 Before a pledge can join a fraternity or sorority, they usually have to undergo “hazing.” Each organization decides what activities to put pledges through, but most of them involve embarrassing or degrading activity.

In the past few years, some pledges have even died during hazing, which has finally raised awareness about this troubling rite of passage. If you or a child has been injured during pledge week, you should reach out to a Delray Beach personal injury lawyer in Delray Beach. We will be happy to look at your case.

Hazing is supposed to be uncomfortable. In theory, it is a way for pledges to show their sincerity in joining a fraternity or sorority. It is also a way for pledges to bond with each other by going through an embarrassing situation. In some colleges, pledges cross-dress or sing songs outside dorms and then everyone goes home. Or they spend a week acting as a personal servant for a member of the fraternity/sorority, even going so far as to carry their books to class.

If you were physical injured during hazing, or if a child died, you should contact an attorney. There may be legal remedies available.

Who to Sue for a Hazing Injury

Hazing cases can be complicated because pledges agree (at least initially) to participate in the activity. Florida law allows people to assume the risk of dangerous activities but then prohibits them from suing later. However, some hazing might start mild before spinning out of control, or a pledge might feel he or she can’t get out of the situation. So the fact your child initially agreed to participate in hazing is not always a legal bar.

The possible entities you can sue depends on the hazing:

Suing a university or national umbrella organization is often ideal, because they have much deeper pockets than an individual fraternity or sorority member.

Hazing is a questionable practice that often gets out of hand. Universities and other institutions must take the practice seriously, and a lawsuit can often prompt institutions to take a closer look at how pledges are treated.

To talk with a Delray Beach personal injury attorney, please contact Earnhart Law today. We offer a free consultation to those who call 561-265-2220.